Hi All! It is the final week to see I am Canadian at the Edge Gallery in Calgary’s historic Inglewood neighbourhood. Make sure you check out all the fantastic work on display, and remember, it IS for sale! Gallery hours are 10 – 5:30 Tuesday through Friday and 10 – 5:00 on Saturdays. 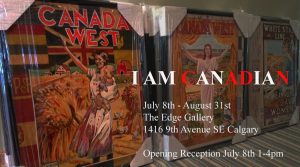 Below I am posting my artist statement with images of the pieces in the show:

The Canada West series are paintings revisiting early 20th century Canadian immigration posters that were intended to encourage immigration to the Canadian West. Each painting interprets the source image through juxtaposition, modification, or both. Through examining the cultural artefacts of Canada’s attitudes to, and experiences with, immigration from the early part of the last century, I encourage a long range view on the impact of contemporary immigration concerns on Canada’s future culture.

The New Homeland places the figure of the original poster in front of a floating field of the flags of some of the major immigrant groups of that time to western Canada, including (in no particular order) France, Romania, Belgium, China, Germany, the Netherlands, Poland, the Ukraine, Russia and Scandinavia.

Salvation comments on the perception, versus the reality, of immigration to Canada by groups escaping poverty, oppression and famine, who then faced the challenge of homesteading unbroken land.

Finding a Dance Partner is interested in the controversy of ‘Surplus Women” in Britain. A gender imbalance if favour of females led to concerns that women unable to marry would fall into poverty. At the same time, a majority of males immigrating to Canada had officials looking for women to immigrate as domestics, hopefully to start families, thus ‘civilizing’ the west.

A Level Playing Field is based on a poster circulated in the United States of America, at about the time the board game Monopoly was invented.

The Spirit Wrestlers engages the history of the Russian religious exiles, the Doukhobors, and their (at the time) radical beliefs of communal living, pacifism and vegetarianism, in Canada.

A Matter of Life and Death challenges the racial stereotype of the white settler through altering the image to speak about immigration by Americans escaping discriminatory laws and race based violence in the United States of America.

Land of Fairytale Abundance is interested in the reasons for and cultural impact of Ukrainian immigration to Canada.